January 6, 2008. The day dawned bright & clean in old Edo (Tokyo) - well, I assume the dawn was bright & clear because that's how it was when I awoke at 07:30 to begin preparations for our pilgrimage to the six different shrines & temples we need to visit today to gather our collection of the 7 lucky gods.

90 minutes & three trains after leaving home we met our friends, Michael & Chikako, at Horikiri train station, which is waaayyy over on the other side of Tokyofrom where we live.  From there we set off on our course along the Sumida River to find our seven little friends who are going to bring us all good fortune & good luck in this new year. The pilgrimage trail we chose to follow was devised in 1804 by Sawara Kiku, a retired curio dealer & a man who liked to dabble in Chinese culture. Sawara owned land in the vicinity that he had turned into a garden, Hyakkaen. He installed a small statue of the Chinese deity Fukurokuju. Once this task was completed he searched the temples and shrines in the vicinity to complete the set of the lucky seven gods and so the pilgrimage was born.

Stop one was at the Tamon Temple (Tamonji). Tamon is another name for Bishamon, the Lucky Deity of this temple. Bishamon/Tamon is known as a protector of Buddhism from evil forces and he also serves as the guardian of the other six Deities of Good Fortune. Tamonji Temple stands in the northern part of Mukojima, which means the "Side Yonder of the River," and therefore acts as the protector of the area. The temple sports a nice thatched gate, the only one left in the whole of the metropolis.

Before we got to the next stop we spotted what must be the original JC Penney - can't be anything but, right(!), given the locale & the age of some of these temples? Not sure what they sell since they were closed (it was Sunday), but gotta wonder about that name!

Next stop, Shirahige (White Whiskers) Jinja (Shrine), where we bought (yep, they actually do NOT give these little statues away) Jurojin, the deity of longevity. Shirhige is a deity of Korean origin. However, he is not one of the 7 gods of good fortune, but like Jurojin he sports a long white beard so the two are easily associated with each other. Jurojin was originally a Chinese god of longevity and he also carries a long staff and is dressed in the clothes of a scholar. 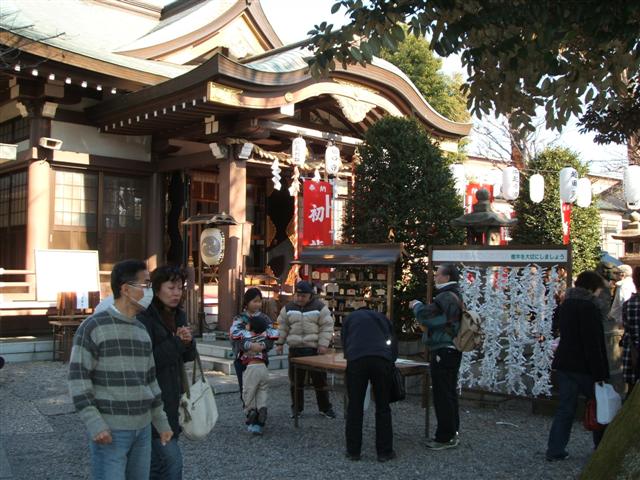 From there we headed for Hyakkaen (of Mr. Sawara Kiku fame, noted above). The garden area covers about 3 acres and the plants and flowers of the garden were all selected based on association with Chinese literature. This is because of the Chinese centered interests during the Edo period, whichi was the era when this garden was completed. There is a small shrine in the garden dedicated to Fukurokuju, the Chinese deity of Good Luck, Fortune and Long Life.

Out of Hyakkaen we spotted this baby (doll) in a glass case (see the pictures). We figured they probably were not selling babies there, but we had to walk around the corner to find out that the place is actually for maternity yoga and baby massage courses. Ah well, at least it is an eye catching display!

On to Chomeiji, the temple of long life and the home of Benten, the only female of the 7 lucky gods. Benten is the deity of music and fine arts. She is not of Chinese origin, but harks back to an Indian water sprite. Chomeiji also has a link with water and there is a sacred spring on the grounds. It is purported that the water from this spring cured Iemitsu, who was the third Tokugawa Shogun (war lord) of a stomach ailment. Yep, we drank the water, so the old tummies should be in great shape for this new year of the rat (according to the Chinese Zodiac).

A short 50 meters from Chomeiji put us at Kofukuji, a Chinese style temple that was founded in 1673 although the present day buildings were done in 1933 after the destruction of the 1923 earthquake. This temple houses Hotei, the jolly Chinese priest with a huge belly and a big smile. Hotei is the god of happiness and contentment. He dispenses gifts from his treasure bag - sort of the Chinese Santa Claus!

We're almost there - the last stop on the pilgrimage - which is Mimeguri Jinja. Mimeguri was founded in the 14th century, but its history goes even further back. However, the central structure that stands there today was built in 1850. This shrine possesses two of the 7 lucky gods. Ebisu is the patron of fishermen, commerce, and good fortunre and carries a fishing rod as well as his catch, a large sea bream. Daikoku, the god of wealth, farmers, and the kitchen is a mingling of an Indian god and the Japanese Okuninushi. He stands on rice bales and carries a mallet that he uses to scatter money around. Both gods are very cheerful and extremely popular in Japan.

Now we have our 7 gods and we even have the boat, their treasure craft, that they sail into the harbor every New Year's eve. 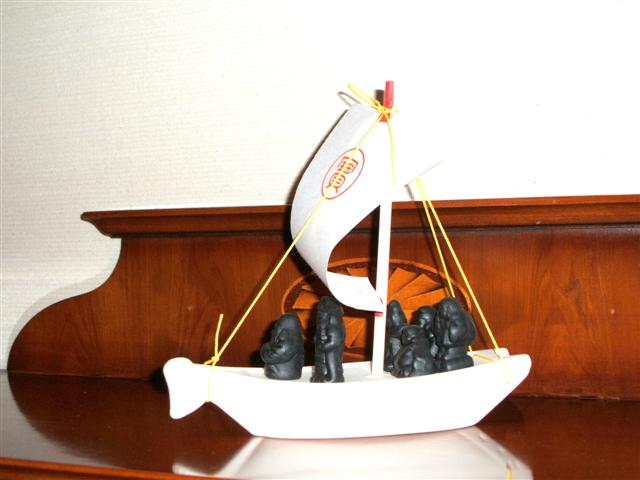 Finishing off our tour we decided to take a different route home so we boarded the water taxi in Asakusa and floated (powered of course) on down the Sumida River to Hinode Pier which is at the mouth of the river. From there a couple of trains rides later we were back home & putting our 7 lucky gods into their treasure craft where they are working hard to bring their treasures of health, wealth, good fortune, and happiness to us and all of our friends throughout this year. 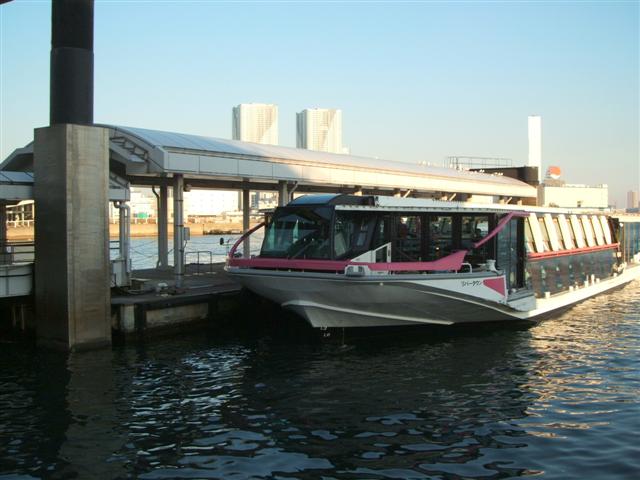