With an early morning start timed to beat the weekend traffic jams the Tokyo Hearts (self & Madam Wife) rolled up the on-ramp of the Chuo Expressway after a brief stop at Meidaimae Station to pick up long-time friends, Wil & Renee Horie.

Well, at least that was the plan. Part of it worked. We did get an early start, we did pick up the Hories, and we did get on the Chuo, but beating the jam? Never happen! Even at 07:30 on a Saturday morning many others apparently had the same idea as the information signs read 25 km (15 miles) jam ahead and over 2 hours to Sagamiko (usually less than 30 minutes). So down off the Chuo we went as soon as possible and after picking up route 20, which we followed all the way to Sagamiko (Lake Sagami) we were able to get back on the Chuo again - about 2 hours later. So much for getting around the traffic, but at least route 20 is a more scenic road taking us through a few towns and past an old favorite, Mt. Takao (covered in this blog in a past post about the hike there).

Our destination this fine sunny weekend was to the Kiso Valley in Nagano Prefecture. The plan was to arrive around noon and walk between the historically preserved towns of Magome and Tsugamo. But, with the traffic, and a left fork instead of a right fork where the Chuo splits, we wound up heading down route 153, then onto route 256 and passing by those towns. Then back up on route 19 towards Shiojiri as we made our way to the onsen (hot springs spa) where we would spend the night, Koma-no-yu Ryokan & Onsen.

After a refreshing beer we headed out for a walk up the road and through a campground that has 20 or more small cabins (very basic, sleeping only) if you're the camping sort.

Back from our walk and time to hit the ofuro (bath). The water in this onsen is very pure and used to contain so much iron that towels in the bath would turn red. The water is filtered now and is just the right temperature for a nice soak. I preferred the outdoor bath (rotenburo) - and the air was just cool enough to make the hot water feel great!

Baths done, all squeaky clean, we headed for the dining room to enjoy Koma-no-yu's very good food and sake. 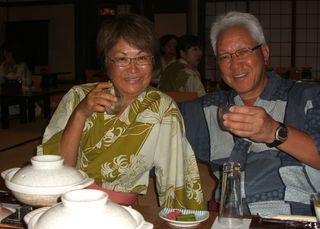 And of course, Joe & Ta had to have their 1st cup too!

Like most all ryokan (inn) in Japan dinner & breakfast were included in the price. Dinner at Koma-no-yu consisted of several courses so naturally, we had to had to have several "courses" of sake, too! We tried 4 brands of the locally made sake and wound up stopping at the sake brewery the next day to buy a couple of bottles to bring home. They are resting well in my wine fridge, but I suspect they won't be there much longer - if you want a taste better hurry! 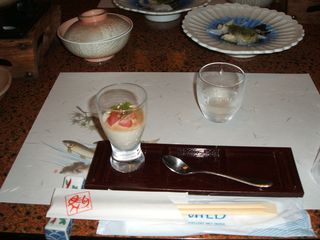 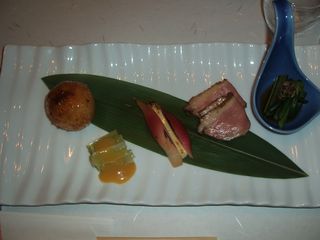 moving on to the appetizers..... 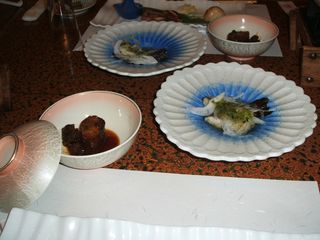 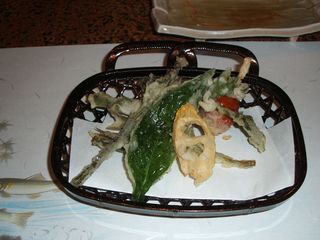 And I forgot to take a photo of the dessert!

Well sated we headed back to our rooms and then off to the baths once more (part of the onsen experience is going to the baths several times) and then the sandman took over and off to slumberland I went.

Waking the next morning with only a little bit of "sake-head" we had a typical Japanese breakfast (sorry, no photos), but the surprise was that they had a pot of coffee on the sideboard which was very, very good - must be the water! Or maybe it really tastes better when you're trying to get rid of a sake-head! 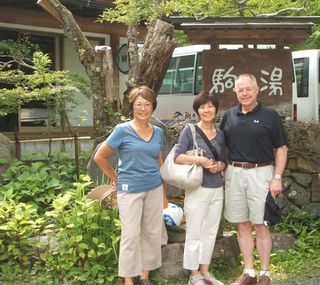 Renee, Ta, & Joe ready to head out after breakfast 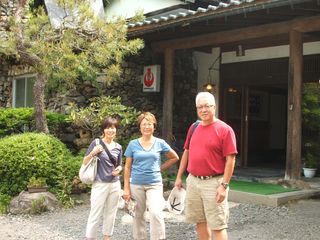 Back out onto route 19 & heading north we drove about 20 km. to the town of Narai. During the Edo Period Narai was the half way point between Kyoto and Edo (the old name for Tokyo) for travelers along the Nakasendo (Central Mountain Road) Route. It was the most wealthy post town of the Kiso Valley. We were there early - about 09:30 - before the crowds so our stroll through the long street was very pleasant and uncrowded. 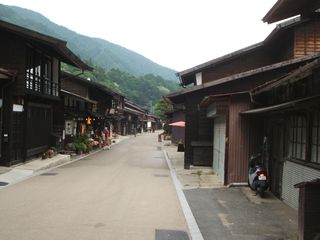 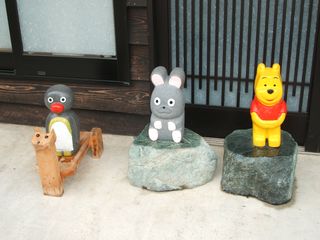 This Narai shop's owner has a sense of humor! 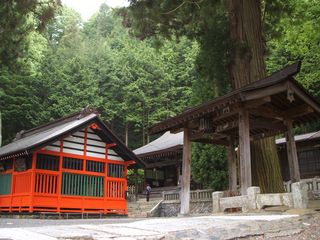 Leaving Narai we headed south on route 19 again till we came to route 256 where we turned and made our way to the town of Tsugamo, another of the stops along the Nakasendo for the weary Edo era travelers (remember, these people were walking and it took them many weeks to make this journey). Surrounded by the lush green mountains this region of the Kiso Valley, and these towns, give one a very peaceful and relaxed feeling. 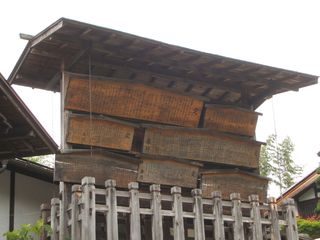 The ancient decrees of the Shogun.

Everyone coming into the village was checked before they were allowed to enter and all had to read these laws - and obey them!

Tsugamo is known today as one of the best preserved post towns in Japan. The town and its residents go to great lengths to recreate the ambiance of the Edo period. Cars are prohibited on the main street during the day, and phone lines and power cables are kept concealed, allowing visitors to imagine they have slipped back to an earlier time.

As we walked down the street of Tsugamo the swallows were busy with their babies in numerous nests built up under the eaves of the shophouses. We watched one momma swallow as she flew back and forth with some morsel for her hungry babies (4 in the nest). It was interesting to watch her remember where she had left off each trip. If she started with baby 1 on the right and ran out of food by baby 3, on the next trip she would start with baby 4 and work her way back across again. Look carefully and you'll be able to count 4 little heads. Baby 3 has its mouth wide open yelling for more food. Baby 2 is fast asleep and if you look really, really carefully you'll see he (she?) has a little tuft of hair on top of his/her head - sort of like Woodstock the bird in the Peanuts cartoon.

This trip we didn't do the walk between Tsugamo & Magome. We were told it would anything from 2 to 4 hours - depends on who you ask - but since one of the people who told is is a local, and she said 4 hours, that's what we'll plan on when we go back to do the walk.

Driving on to Magome we walked down, down, down the long hill of the town (guess what that means - yep, coming back to the car means we walked up, up, up!). 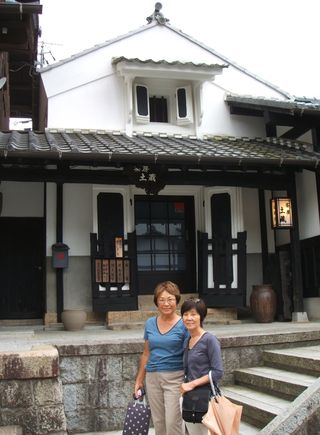 Shop along the street of Magome (models are Renee & Ta)

Magome has been beautifully restored with a broad stone walkway lined with carefully tended foliage. Magome's embellished preservation contrasts sharply with the rugged authenticity of Tsugamo.

All walked out it was time to head back to modern day Edo (Tokyo). Back on the Chuo we made good time till we got to Sagamiko where once again the roads showing on the GPS navigation system in the car were bright red - meaning jutai (jam). Rather than sit in the traffic we pulled into one of the highway system's very well appointed rest stops where we had dinner and gave the traffic a bit of time to clear out. Sure enough, that did the trick, and we moved along at a decent pace all the way back into town.

We'll plan a trip back to the Kiso Valley in the autumn when we expect that the foliage will be bright and beautiful making the yet-to-be-done walk between the two village even more pleasant.