Our last day in Carmel before heading off to see the Grand Canyon tomorrow. We awoke to overcast skies and slightly cooler weather today at 15 degrees C (about 59 F).

After a slow starting morning we decided to head over to Monterey for a visit to the acquarium. The Monterey Bay Acquarium was founded 1984 and is located on the site of a former sardine cannery on Cannery Row.

In addition to the acquarium Cannery Row has a number of shops (very touristy) and restaurants - also very touristy, but we tried one that had a pretty decent lunch, especially if you like fresh sardines. We had them in marinara sauce at Trattoria Paradiso (hmm, there are sure a lot of Italian restaurants in Monterey & Carmel - but for good reason:  Italian food is GOOD FOOD - my heritage comes out!).

We watched the sea otters float around and we figured they were either disturbed at being in a tank, or they had some other problems, but the docents there assured us their constant rubbing of their faces and their chests is their normal grooming routine. The otters spend 99% of their time in the water & have very luxurious fur - over one million hairs per square inch! If they don't keep it groomed they get cold after all that time in the water. The docent told us they basically just eat, groom, and sleep. Whatta life! On second thought, I think I know a few humans like that.....

The other exhibits we found very interesting were the jellyfish and seahorse tanks. I never knew there were so many varieties of each.

Can you imagine a seahorse that looks like a plant? Well, that's just what this Leafy Sea Dragon resembles. 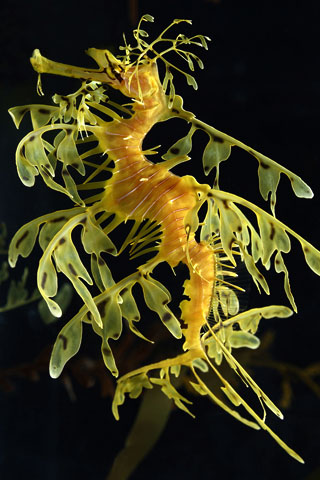 If you're in the area be sure to include a visit to the acquarium. It will be a relaxing couple of hours and you'll see some amazing creatures (people & fish!).

Back in Carmel we made our way downtown for a final walk about the town and a stop in the Cima Collina wine tasting shop to try a few of their wines. Some nice wines from this small artisan wine producer. Worth a stop-by if you are in Carmel. Try the wines for only $5 and that is waived if you buy $40 worth of wines to take home.

So, we close this chapter of the Tokyo Hearts' summer of 2010 trip to the USA. Stay tuned - next chapter from Arizona where we expect the temperatures will be a bit (a lot!) hotter than we've enjoyed here in lovely Carmel-By-The-Sea.