Pedaling away, off we went under a leaden sky, no raincoats, no ponchos, no umbrellas. Destination.....one of our favorite soba (buckwheat noodles) shops for a Sunday afternoon lunch. We figured we could get there, eat, and get back home before the rain started.  WRONG!

As we finished our meal we could hear the rain drumming against the wooden facade of the soba shop. We figured we could wait it out & ride our bikes home with no more than a bit of dampness. WRONG AGAIN!

As we paid our bill we asked the shop assistant if there was a 7-11 or something similar nearby where we could buy an umbrella. Rather than direct us to a store the shop owner volunteered a couple of umbrellas that had been left behind by other customers in the past. We said we would return them, but no need, said the waiter. These were spares that, if they didn't give them away, they would have to discard. One was actually a pretty nice umbrella - fashionable and probably fairly expensive when bought. The other was very serviceable. In fact, the waiter opened up and tested the umbrellas before giving them to us - he even discarded one of those "throw-away" type that are so often abandoned here & there in Japan - the clear plastic ones that sell for 100-300 yen. (Oh, and this is where the title of this posting comes from - it's not the first time I've been given an umbrella by a restaurant - so if you're caught out without one when the rain starts - and you're in a restaurant just ask where you can get an umbrella. Chances are you'll be offered one, at least here in Japan, that is.)

Well, riding home holding an umbrella was a first for me. I've seen people doing this hundreds of times, but I never figured it was something I would want to try. The gusting winds made it a bit more of a hassle, but all-in-all it was easier than I had thought it would be, cramped right hand not withstanding.

Now, if I had only had a umbrella attendant like the one in the picture below..... 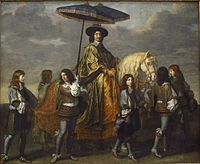