Japan has 15 national holidays per year. This compares to 10 in the USA and France and 16 in India. In addition to national holidays many companies in Japan close for several more days during Oshogatsu (New Year) and Obon (in July).

Very few of these Japanese national holidays serve any commercial purpose with the exception of sales for travel agencies during Golden Week (April - May), osetchi ryori (traditional New Year's food) sales during the new year, beauty salons for coming of age day, and perhaps some presents for  children on children's day.

On the other hand, adoption of western holidays seems to be solely meant to open the purse strings of Mrs. Suzuki and all her family and relatives.  Christmas, one of the west's most holy holidays is not much more than a season to sell cakes, toys, and other presents here in Japan (of course, it's exploited for pretty much the same reasons in the west). 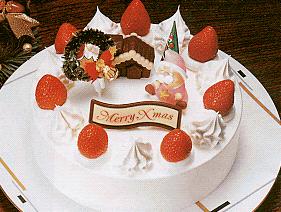 When we lived in Japan in the 1980s the only Halloween costumes we saw were on the American children in our neighborhood who went to school parties, or to a few home parties, and maybe a bit of door-to-door Trick or Treating in the neighborhoods with high foreigner populations.  That has certainly changed! Now, even driving out in the countryside I have seen pumpkins carved with various designs  - some typical, some not. There are even costume parades in many areas and of course, many bars take advantage of the "holiday" to hold costume parties and offer special Halloween drinks. 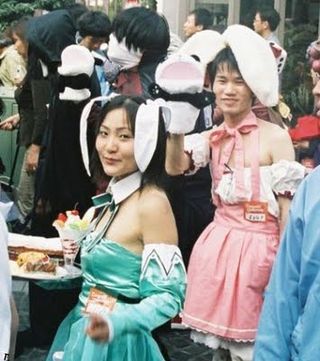 I asked a few friends - Japanese and foreigners - what they think of this growing trend of adopting foreign holidays in Japan.  Below are the responses (J = Japanese; F = Foreigner):

F:  most Western holiday celebrations here are simply the fondest dreams of merchants coming true. Valentine's Day,  Halloween and Christmas are great opportunities for any company that deals in romance, confections or toys to suck in some major cash.

F: Christmas that starts in November, Santa dressed in blue, yucky cream sponge cakes, and celebrating in bars on Christmas "ibu," [eve] work as usual December 25, Christmas dinner with sushi on the table - these are the only times I've ever felt homesick in Japan. I sometimes wonder how the Japanese would feel if we all suddenly started doing Bon-odori in gaudy yukata wearing shoes and socks and with a brass band thrown in Times Square or Piccadilly Circus. All put together by commercial interests of course!

J: Halloween has become a profitable business for bars and pubs. The Halloween party is now adopted as a seasonal event in bar businesses.  St. Valentine's day brought profit to chocolate makers and it seems that there are businesses behind the newly introduced holidays. Since the mid-80’s, the Affiliation of Book Stores Union is attempting to promote Saint George's Day in April as a day for presenting books to loved ones. It seems they have been unsuccessful though.  I wonder what holidays we Japanese will be “adopting” next.

J: I read in a book that few holidays tap into the American psyche so closely as Halloween. I cannot understand why this is so. My guess is that the spirits of ancestors of both immigrants from abroad and native Indians might all be there to act on inhabitants to celebrate the unity of all people.

J: Personally it is OK with me.  Japanese have always been a very flexible people. And the advertisers and merchants want to take advantage of any reason to make a special day to sell special items. So I expect that there will be more and more. They may introduce, Chinese new year plus The Songkran of Thailand, Mahatma Gandhi Day? Ramadan? Who knows?

F: I don't mind.  The more the merrier.  I just wish that those adopting someone else's holidays also try to understand the origins and rationale for those holidays.  I'm not saying that those from the countries where the holidays come from understand their own holidays either.  Take Japanese holidays.  After talking to several young Japanese, I realized that I know more about the origins of their holidays than they do.  But if someone were to adopt the ways of somebody else, at least he must know what exactly it is he is adopting.

J: In my view, Japanese adoption of many western holidays has gone a bit too far. In essence, such adoption has been limited to  commercial/business effect of such holidays without much appreciation of the spiritual/social backgrounds of such holidays in their original jurisdictions. 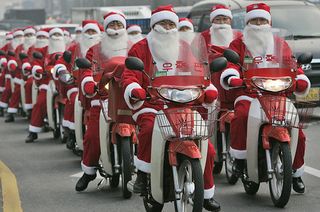