« Traffic Criminal at Heart? | Main | Get your caffeine fix in Japan »

Despite the cloudy skies we decided to take a drive to Tsuchiura yesterday - why not - never been there. Only about 75 km to the northeast of our side of Tokyo, Tsuchiura City turned out to be not so interesting, but we didn't actually cruise the whole town.

We were more interested in seeing Lake Kasumigaura, which is Japan's second largest lake. Originally a brackish lagoon it was enlarged when a water gate was constructed at the confluence of the Hitachi and Tone rivers. This decreased the salinity and it's now a fresh water lake that's very popular with fishermen and is well used for various water sports. There are also several marinas around the lake and we saw a number of sailboats on the water.

As we drove around the lake we were suprised to see field after field (actually pond after pond) of long stemmed, very large leafed plants. At first we thought they were "fuki" (a sort of Japanese rhubarb), but we finally figured out that they were lotus plants. It turns out that this area is one of the two largest (maybe the largest) lotus root producing areas in Japan (the other is in Kyushu). 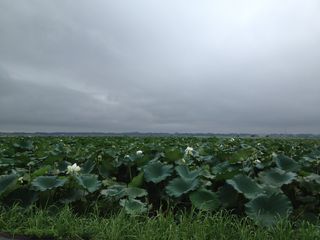 We were amazed at the number of lotus ponds - as far as the eye could see - with a few pink or white blossoms. We later learned that July is the best month to visit when the plants are all blooming and the ponds are covered in the lovely lotus blossoms. We plan to go in July next year and see for ourselves. 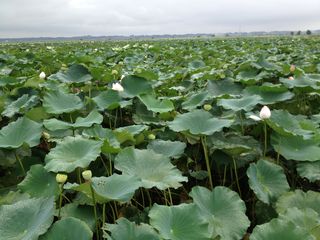 You may have eaten lotus root - in fact, most certainly if you've been to a Chinese restaurant. It's round with several holes and usually quite crunchy. 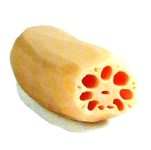 You've also probably seen the flower pods which are often dried and used in floral arrangements. Here's one I photographed to show you what they look like. 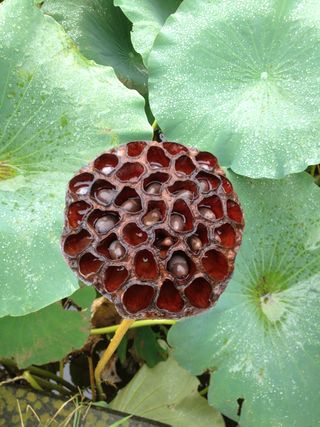 Lake Kasumigaura is also known for the "Hobikibune." These are the sailed fishing boats that have been used for centuries. We saw one in the small museum, which is housed in a castle structure, on the east shore of the lake (yes, it's worth 45 minutes of your time to tour this and the price is right, only 210 yen). We were quite surprised at the very large size of the sail when compared to the boat, which is only a few meters long and not much more than a meter wide. The fishing nets are attached to lines that run from the boat. As the wind blows the boat along the net scoops in the fish. 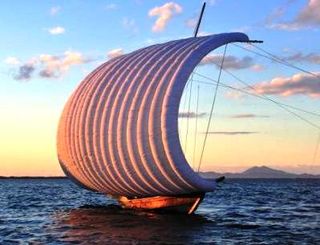