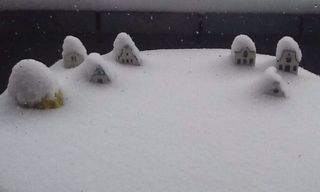 (Photo: our little ceramic village on our patio table)

It's always amazing to those who are from areas of the world where snow is common to see the chaos a bit of snow raises in Tokyo. The city is just totally unprepared to even the smallest amounts of snow. Drivers get confused, trains stop running, shops close early, people stock up (gotta have that toilet paper!), and numerous injuries - even deaths - occur.

Last Saturday (Feb. 8, 2014) though was an exceptionally heavy snow day. Some parts of Tokyo had as much as 10 inches of snow, a 45 year record, and that pretty much brought the city to a standstill. Roads were closed, trains were stopped, and hundreds of flights were cancelled. Over 1,000 we injured in snow and ice related accidents and 7 died. On a positive note, this is the first time I've seen so much cooperative effort to clear the snow from sidewalks and even roads (Tokyo doesn't seem to have any snowplows). I even saw a man in our neighborhood clearing part of the street with a dustpan and a lady in a kimono clearing a path from her house to the main street with a dustpan too. Guess neither of them had shovels.

It's snowing - so far lightly - again today and I've already heard people talking about going home early, and by early I mean 9:30 in the morning - so they don't get stuck in the city if the trains stop running. So far though, the snow is not sticking on most of the streets, and the actually snowfall seems to be pretty light. However, the memories from last Saturday seem to be stuck in everyone's mind and people are overly cautious. It's good to be cautious, but some do go overboard. 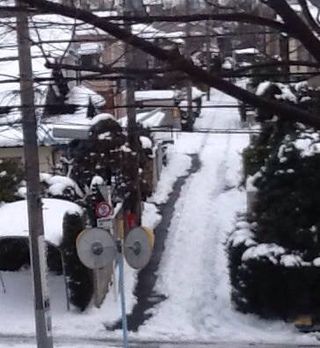 (Photo: path cleared with a dustpan)

Posted at 11:48 AM in About Tokyo, Culture | Permalink