« White Hearts | Main | Hearts in the Toilet - the Musical Toilet » 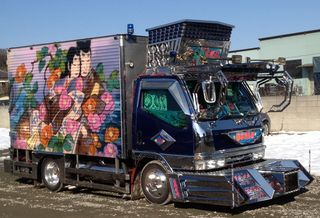 I had a lot of fun filming an episode about the decorated trucks of Japan for the Travel Channel. Below is the story I wrote about the experience.

The rumble of powerful engines, air perfumed by diesel exhaust, bright lights flashing in the night: all ambrosia to the senses of the owners of the Decotora, the Decorated Trucks of Japan. Sometimes also known as Art Trucks these trucks are the pride and joy of their owners.

The trucks range in size from small cargo trucks to megaton dump trucks. There is even one owner who imported a Peterbilt, the behemoth of the American highways, from the USA. Some of the trucks are actually used in the owner's day-to-day work, but for the most part these are hobby trucks. Expensive toys for Trucker Boys.

The major decoration for Decotora consists of art scenes, many depicting Japanese heroic tales, on the side panels, the rear cargo doors, and the passenger cab doors. Most of the owners have the art work professionally done and painting a large cargo truck's side panels and cargo doors can take a month or more of six to seven hour work days for the artist. I met one of the artists, Mr. Sakai, and at age 77 he still enjoys painting the trucks. In his former career he painted the identifying numbers on the fighter jets at the US air force base in Misawa. During his younger days, in the era before TV, he kept busy painting advertising posters for movies. Now, with movie posters a thing of the past, he paints Art Trucks. One that I saw, which he recently completed, depicts two scenes of the slaying of a three headed "Orochi" (a dragon like serpent). Those paintings took him a month and for his work he earned about US,000.

The decoration for these trucks doesn't stop at the paint job though. Trucks are outfitted with many other trappings starting with a variety of flashing lights; some with multi-colored neon lights. Most have multiple horns including bellowing air horns as well as horns that can play any number of tunes selected by the driver. Other common features include chromed ladders to reach the top of the cab, front bumper extensions, top racks, and special music to play when reversing. One dump truck I observed played Japan's national anthem as it backed up. Owners also decorate the inside of the cabs. Interior decorations include just about anything the driver can imagine. I took a ride in one that had a Swarovski chandelier. It was also outfitted with curtains, dash and window accouterments, and the owner had hand crafted fancy door panels and seat covers. One truck I saw included a tatami seat for the passenger and had a small tatami mat room behind the driver. The room was spacious enough for one person to sleep in and was entered by sliding the shoji (paper paneled) door open.

Owning one of these trucks is not a poor man's hobby. In addition to the cost of the truck, which can range from ,000 for a used truck, to up to tens of thousands of dollars for a new dump truck, the cost of decorating the trucks puts a pretty heavy burden on the wallet. Depending on how lavish the owner wants to make it, and how deep his (or her) pockets are, the typical budget is 0,000 to 0,000 (10 to 15 million yen). Not chump change in any language. It doesn't stop with the first outfitting either. Most owners add new touches on a regular basis and many of them do a complete refitting every couple of years or so. As one of the owners told me, "You can buy a house in most of the suburban areas of Japan for the cost of one of these trucks." Owners range from young guys, those who typically use their trucks to earn their daily rice, to mature business owners. The younger crowd typically owns smaller trucks and as their income and stature in the world of Truck Guys grows they move on to bigger and more lavishly decorated trucks. Several of the owners I met are also independent business owners like roofing contractors or house construction company owners. 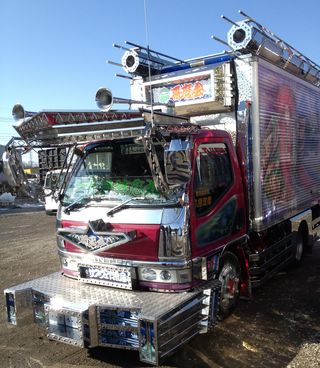 Back in 1975 Toei started a series of 10 movies called "Torakku Yaro" (Truck Guy) about a Decotora owner who drove his decorated truck all around the country. The movie was a hit and started a fad. The Decotora owners now have their own association, The Utamaro Kai, which was named for Kitagawa Utamaro who was one of the best regarded Ukiyo-e artists, especially prints of female beauties. Consequently, many of the trucks are decorated with scenes from Utamaro's prints. The association holds regular get-togethers to show off their trucks, meet old and new friends, and pick up new ideas for their own next redecoration. The next big show will be held in Shizuoka during Golden Week on May 4th. This show will showcase more than 1,000 of the best Decotora from around Japan.

Here is a link to a short video of a few of the trucks.