« Will Japan Become a Nation of Immigrants? | Main | Help Wanted in Koenji!! »

The mountain forest cabin had been deserted for nearly three months when we arrived on a chilly and rainy night. The cabin was cold, but we soon had a blazing flame hissing in the main room's oil heater.

As the cabin warmed up I toured the rooms to make sure all was ship shape. Imagine my surprise when I saw the desiccated corpse in the bath.

It had no clothes on even though the bath was dry. Even without clothes its gender was impossible to determine as the cold dry mountain air had shrunk the corpse to a much smaller version of what it had been as a living being.

I could see nails and hair - gray hair - was it (it because remember, no gender is known) an elder or was gray its natural color.

Swallowing my own revulsion at this gruesome site I swaddled my own hands in tissue before I lifted the corpse from the bath.

Holding it in my hands I looked at it again. Was it male? Was it female? I couldn't tell and honestly, I no longer cared.

Was it a mole? Was it a field mouse? Honestly, I didn't care. I just wanted it out of the bath and done away with, which I hastily did. Farewell little mole or field mouse. Rest in peace along with your brother or sister that I found the last time we visited our friends' cabin.

Thus began our weekend in the wonderful land of Kita Karuizawa.

The rain gave way to sunshine on Saturday, which meant we could once again enjoy a BBQ on the deck. Fortunately, the wind was non existent by the time we started our meal and the BBQ threw off enough heat, helped by a glass or two of red wine, to keep us warm. Oh, and the heavy down jackets we wore were mighty welcome too.

Sunday's return trip to Tokyo included a side trip to Kanbara Kannon-Do Temple near Kanbara Village. Kanbara is known as the Asia Pompeii. In 1783 Mt. Asama erupted and lava moved quickly down the mountain's western slope. Although the lava stopped several kilometers away from the village the force of the lava pushing stones and earth ahead of it buried the village and nearly 400 hundred of its inhabitants under 5 to 6 meters of soil and rocks where they have rested for over 230 years.

Excavation of the village and Temple have turned up human remains as well as numerous artifacts. The artifacts are displayed in a nicely done museum called Tsumagoi Kyodo Shiryoukan.  If you're in the area, which is also close to the well known ski area, Manza, take a bit of time to stop by the museum and visit the small Temple. At the Temple, 7th and 8th generation descendants of those who survived the eruption will welcome you from the hut in front of the Temple, which is there for the maintenance of the Temple. If you speak Japanese feel free to talk to them as you share a cup of tea and bites of pickled cabbage. 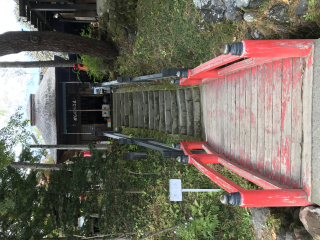